Africa in Motion Film Festival presents: 'Sports Stories from around the African Commonwealth'

‘Sport has the power to change the world’ – Nelson Mandela, 2000

Welcome to this special edition of the Africa in Motion (AiM) Film Festival. We are kicking off the year with a touring programme of African sports films, entitled Sports Stories from around the African Commonwealth, which is set to journey across Scotland during the lead up to the Glasgow 2014 Commonwealth Games. The tour is an official Culture 2014 event. 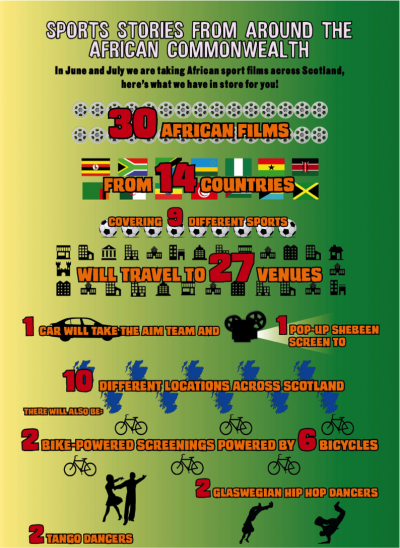 By highlighting the diverse array of sport narratives from across Africa we will show how each country and region has its own story linked to sport, depending on their history, culture, economy, climate, and ethnic diversity. We are travelling across the African Commonwealth and beyond, allowing Scotland Commonwealth spectators to watch boxing in Ghana, cycling in Rwanda, long-distance running in Kenya and Ethiopia, surfing in South Africa, football in Nigeria and much more.

Sport has the power to inspire, challenge and test everything that makes us human; it can break down the barriers of difference, create hope, promote equality and build friendship. The festival will also use sport to highlight some of the main aims of the Commonwealth including HIV/AIDS awareness, democracy, refugee and asylum seekers and the history of slavery. Viewers will be taken on a visual journey through the African Commonwealth highlighting triumphs and key challenges through sports.